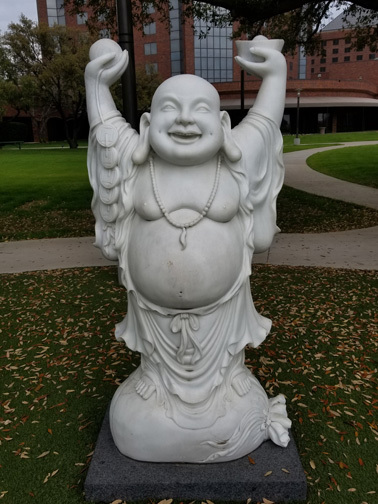 I was kicking around downtown Dallas this weekend, going through the Market Center district looking for a relatively famous camera store. After laying down some money, I wandered past the Hilton Anatole and had to stop in. For those not in the know, this was the site of last year’s Interchange. It’s the annual meeting (one in the US, one overseas) for all users of Ivanti products. And what a great time we had last year. Everybody you ran into was friendly and willing to talk and share information. And if you’re like me (not a huge world traveler), you would have been floored with the art collection spread throughout the entire hotel complex. There’s a long story about the collection – you can read about it at their official web site. One of the most famous pieces there, besides the two sections of the Berlin Wall, is the world renowned “Touchdown Buddha”. He kept a watchful eye over all of us last year, so I spent about 15 minutes talking with him again to ask his opinion of last year’s event.

This year’s Interchange is almost upon us. It comes quickly – the 29th of April – and it’s being held in Nashville. So, without further babbling, here is Touchdown Buddha’s list of reasons why you need to attend this year’s event:

Interchange, at the core, is all about the interchange of information. From Ivanti to you, from you to your Ivanti Partner (and to Ivanti as well!). If you want to come and still haven’t purchased a ticket, call us ASAP and we can get you a discount seat. Make sure you stop by the Dataseti booth while you’re there and tell ’em that Touchdown Buddha sent you.